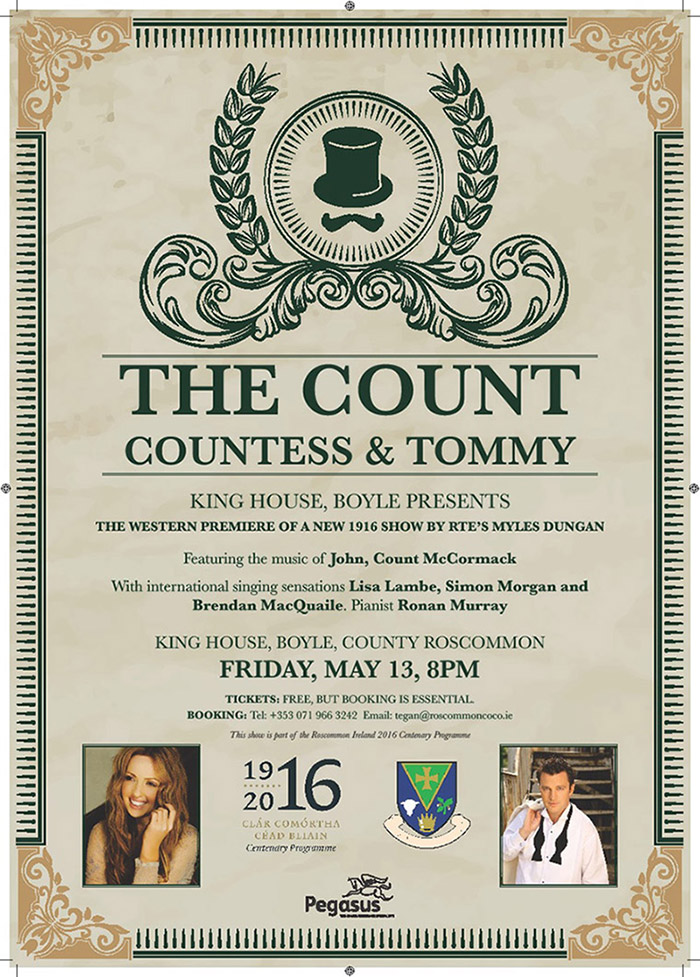 FRESH from her celebrated performance in Sunday's Laochra spectacular in Croke Park, singer Lisa Lambe heads to King house, Boyle on Friday 13th May for another stirring 1916 commemoration.

Laochra, which followed the Allianz Football League Final, thrilled fans of all counties and colours, bringing together more than 3,500 performers.  It was Lambe, however, the former Celtic Woman star, who brought the crowd to its feet with her memorable rendition of The Foggy Dew.

Lisa now heads to Roscommon’s historic King House, in Boyle, to star with Simon Morgan in the western premiere of Myles Dungan's new 1916 show – The Count, The Countess & The Tommy.

May 13 is the date set for the first-ever west of Ireland performance of the show, which centres on the life and music of the celebrated Irish tenor Count John McCormack, and features some of the best-known songs of a hundred years ago.  The show is a centrepiece of broadcaster Myles Dungan's Paths To Freedom roadshow project, a unique package of lectures, presentations and shows remembering the Rising, one hundred years on.

The Count, The Countess & The Tommy is hosted by Roscommon County Council Arts Office & Library Services, as part of the Roscommon Ireland 2016 Centenary Programme.

Fronted by RTE presenter and historian Dr. Myles Dungan, the Paths To Freedom programme brings together a team of broadcasters, authors and key academics with important things to say about the legacy of 1916, plus a cast of international performers, for a special two-part commemoration, comprising…

·         A day-long programme of talks and presentations on 1916 and its legacy
·         An evening performance of the music of the era, showcasing the songs of John, Count McCormack.

On Friday, May 20, King House, will welcome a selection of top-class speakers, academics and personalities for a series of presentations on the changing nature of Irish politics, work, class and gender roles in the years leading up to independence, explaining that the Rising was part of a wider narrative, not the whole story.

King House will also offer a complementary musical show – The Count, The Countess & The Tommy – featuring songs and stories from the era of the Rising, centering on the music of the celebrated Irish tenor Count John McCormack, and also the popular songs of Lena Ford, Ivor Novello, Stanley Kirkby & George M. Cohan.

This show, written by RTE’s Myles Dungan, will be presented at King House on Friday, May 13, at 8pm and will feature headline acts, including...

Lisa Lambe:  A singer and actress, Lisa is best known for her work at the Abbey and the Gate, and as a member of international singing sensation Celtic Woman.

Brendan MacQuaile:  Brendan is a classically trained baritone who performs widely in Ireland and internationally, and features regularly on TV and radio.

Tickets for both events are free, but booking is essential.

The Paths To Freedom programme is offered by Roscommon County Council in collaboration with Pegasus Consulting, the company behind the hugely successful history projects The Fighting Irish (2010) and The Great War Roadshow (2014-15).

Posted by realboyle.com at 8:22 AM